Centre for interdisciplinary art (CIA) Kalabhavan, Visva-Bharati University offers the possibility of sound art practice for visual art students through a discourse during one month long workshop by the artist in residence – Michael Northam.

Michael, defining himself as trans-media artist, is a US born wandering sonic artist who is fascinated by the mystery of nature. He started his journey as a creative artist in 1991 and has been continuously researching, excavating and exploring new artistic languages. Which has been a path through; graphic design to photography, then transformed to phonography, to performance, to sonic sculptures, and now to sonic compositions or installations. I think he will continue this meandering path untill he becomes satisfied with the medium, and at present, it seems- he is satisfied with the magic of meta-sound. 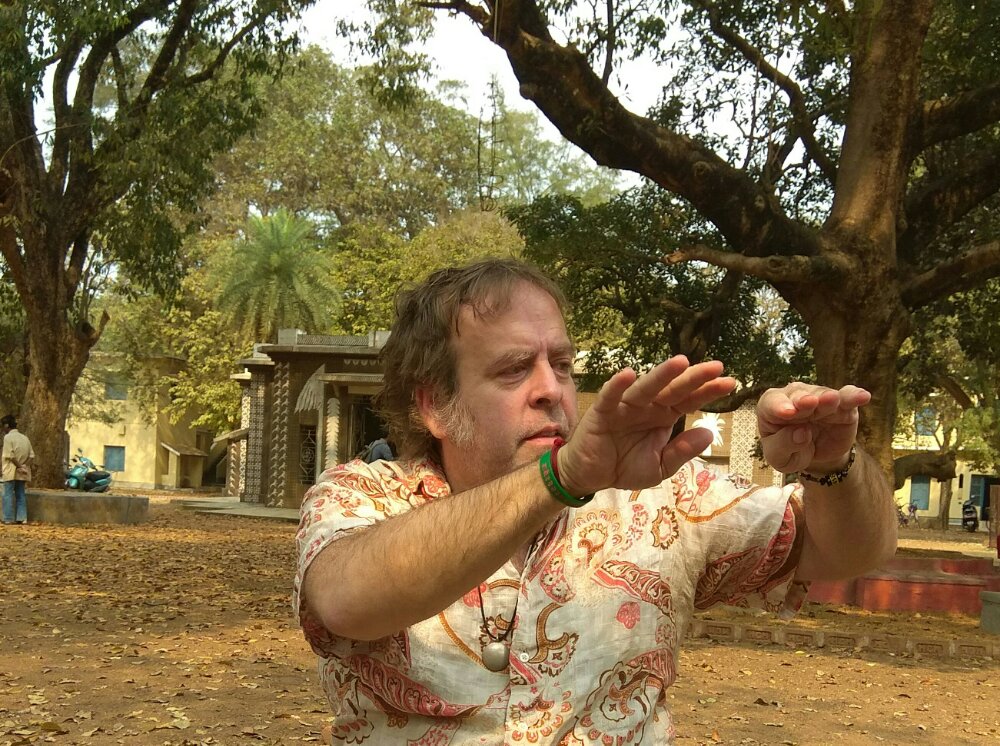 His work is spiritual and metaphysical, which comes from Tibetan vajrayana Budhism. But I don’t want to talk about that now. Simply, I would like to relate the energy of sound and its potential in its creative process. Which is quiet unwritten, philosophical, and purely experiential.

We met him on the 5th of February, the day we celebrated Artist K G Subramanyam’s birthday- exhibiting his final works, inaugurated by Manida’s daughter on the occasion shared by the whole Kalabhavan organised by Visva- Bharati University and Seagull Foundation for Arts followed by a musical evening. Budhadev Das played Esraj at the courtyard. The visual accommodated to that environment was cool enough in the last part of the winter season this year; Green of the trees in the typical Santiniketan-yellowish light background. Sanchayan da introduced Anudev to Michael Northam ;well, suggested for a collaboration with him. 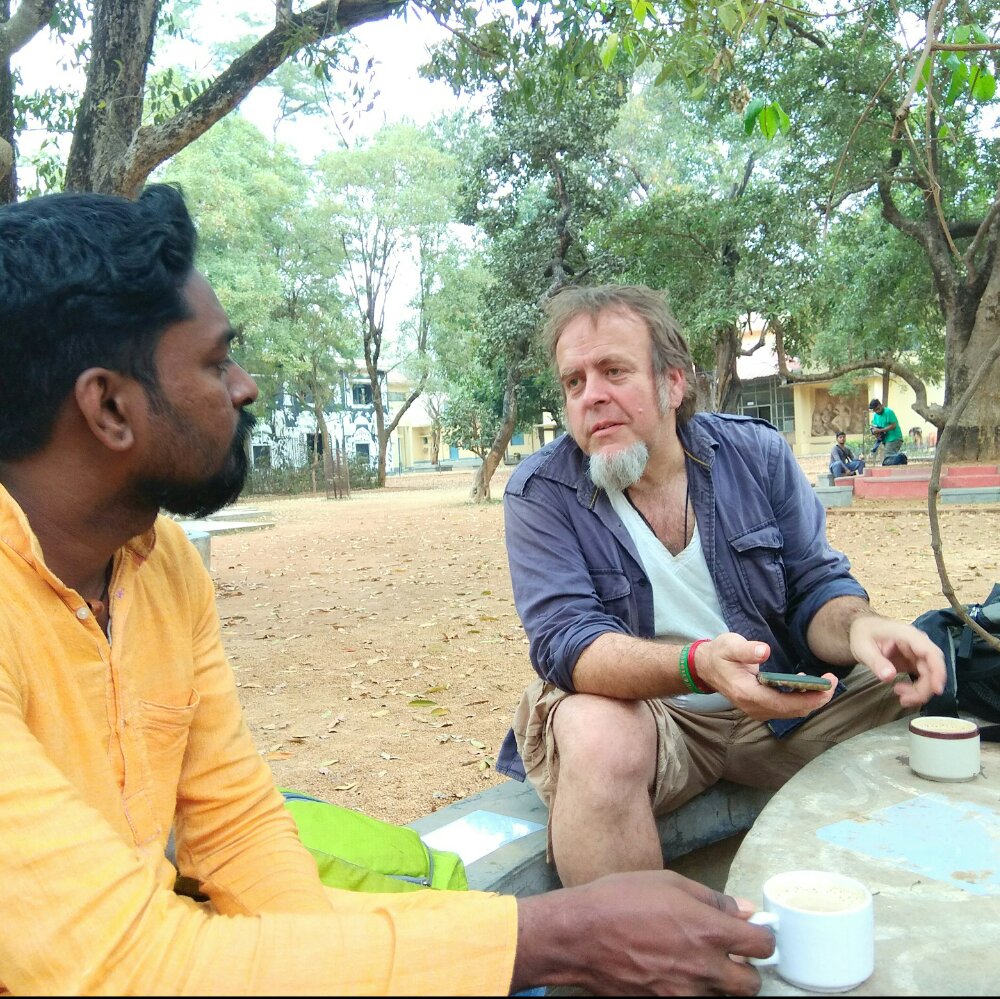 Sanchayanda and Arponda opened the CIA-hall for the workshop which was not in use for long time. So we had to do some set up to make and feel the workshop-studio under the leadership of Michael. We started working as a core team.

Michael Northam is an amazing contemporary sonic artist who, I would say ; deeply rooted. Diligent, our conversation continued while we worked setting up stereo speakers and mixer.

I wonder why in India we are forced to pay more than international standards for the ‘good quality’ products? I can say this as Anudev was researching some electronic equipments for our needs- like camera, microphone, speakers… in these days, where the advanced and quality products are not available to Indian, even through shipping. And when we find some better one on Amazon India, we have to pay high which is more than affordable to a common man. Michael was sharing the price of his mini rig speaker: Indian Rupees 5000/- in US for his UK made speaker. When we check it in India it costs 22000/- !!! What to say… ?~ That’s another matter, any ways.

Michael often talks about spontaneous ideas, experiments with sounds from found objects and location recordings. We witnessed him collecting recordings from faucets. Later, trashed sewing mechanical machine found on the ground floor, is brought to the CIA-hall. Michael and Anudev were creating various sounds out of rubbing the plastic led surface against that machine wheel. Later on, the experimentation was on the sound field of a conch. For him, creating a sound-effect for a particular situation is also very important. Rather that is special about his sonic works. This surfacial-textural sound is what he talks about the ‘stochastic topographies’ in his works. Various surface-texture sound perceptions are just like the tactile and visual inputs of material surfaces. Observation and listening is essential for knowing the material.

The fundamental starting is ‘listening’. Do we have time to listen? Not in usual conditions among us or we are loosing the power of listening some way. According to Michael, listening is the initial and crucial criteria to enter in to sonic arts. Therefore he planned the workshop with listening, the awareness sessions and recording and editing, the technical sessions.

Why don’t you work with music department as it is about sound compositions? The sudden response by Michael was; “they don’t usually understand me, And I am not doing Musical paradigms either. So I prefer working and collaborating with visual artists.”

When he came to our home, we made typical kerala treat- Idli, Sambar, and Chutny which seems one of his favourate. I have read in an interview by Josh Ronson, in which Michael shared the yummy feeling he had for the food from Kerala, especially Idli. While, he was sharing his experiences; life trajectories- in his words. The comparison he made with layering of sounds and cooking was momentarily momentous. We felt he explored the places in India more than us, during his past five visits.

The introduction to the workshop initiated at Nandan gallery-first floor on the 9th evening at 4.00pm by Michael’s presentation on his art followed by his performance based listening session. The gist was his trans-journey from graphic-photographic explorations to sonic live actions. The performance was an intervention in that space- a listening space where; students were hearing his presentation and been asked to close their eyes and just listen. Michael started making several sounds out of his instruments and electronic equipments installed in the heart of that hall. Those things- his mobile sonic system- was topped with or enclosed using dry leaves collected from Kalabhavan Campus. Afterwards the students could actually go live through the sonic zone created by Michael. 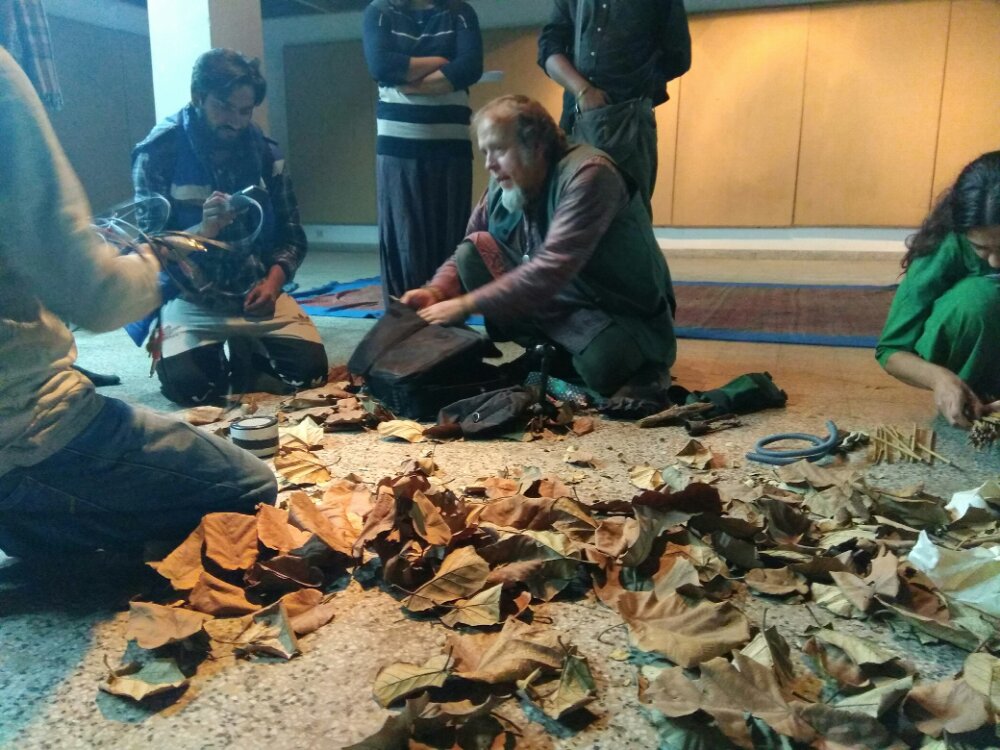 Here is one chinese character for ‘listen’ which Michael shared with us; 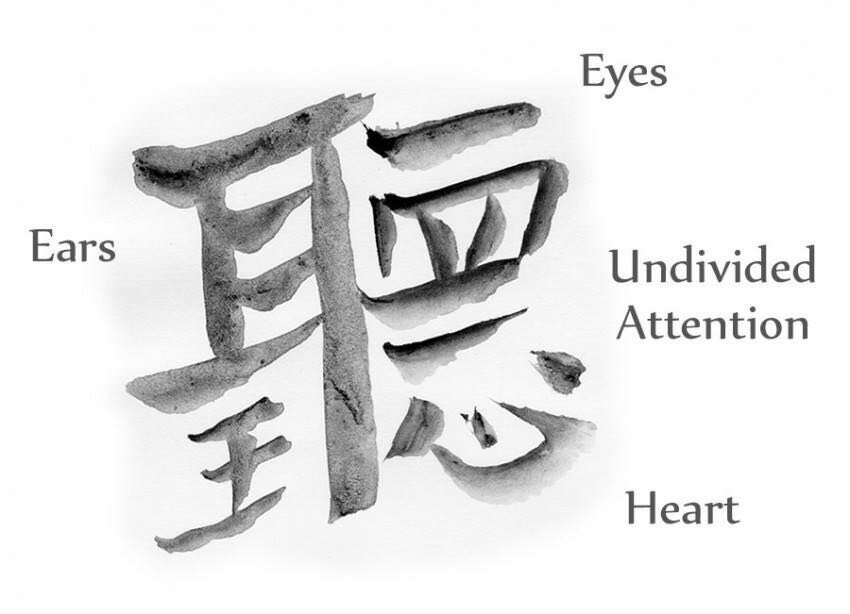 Seethal C P is an Art Educator, Theorist, Curator and Writer who holds a master of visual art (MVA) degree in Art History and Aesthetics (2011) from Maharaja Sayajirao University of Baroda. She has qualified for assistant professorship and Junior research fellow award. She is presently pursuing Ph.D. in History of Art at Visva-Bharati University. She was part of an innovative art integration-education program for several schools in India in the year 2016 as Theorist and Program Director at Art1st Foundation in Delhi. Her experience in Kerala as an Art educator from the year 2012 to 2015 includes faculty positions at Govt. RLV College of fine arts, Tripunithura and Sree Sankaracharya University of Sanskrit, Kalady in the dept. of art history and aesthetics. She has researched on the ‘Narrative Strategies of Wood Carvings in Kerala Temples’ and ‘Kalamezhuthu traditions’. She contributed her part in several contemporary curatorial projects. She is continuously doing seminars, paper presentations and publications. She was member of the board of examiners at different universities in Kerala. Seethal trained in Kerala traditional mural painting and had worked on wall murals of some Kerala temple Sreekovils using natural colours. Two blog sites: seethalcp.wordpress.com , crystalball3.wordpress.com View all posts by Seethal C P

CUTTING EDGE: IN THE FUTURE OF SCHOOL- ART EDUCATION IN INDIA